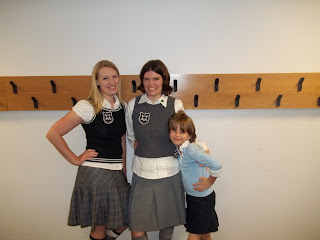 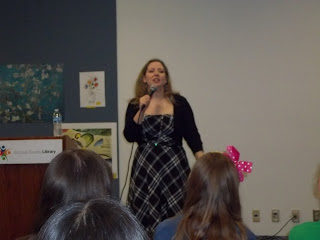 Went to see Ally Carter at the county library last night dressed as Gallagher Girls (me, my friend and my daughter). She was awesome! Got free key chains. Love those freebies. She said my hubby's Blackthorn t-shirt was her favorite. I mean, it's not every tour that she meets a guy so in love with his wife that he will consent to wearing a t-shirt for a school that exists only in YA chick lit!

Ally was friendly, personable, and speaks with a charming slight Midwest accent. She is touring and signing as her new book Uncommon Criminals has come out this month. I waited, ever so patiently to buy it from Puddnhead Books (an indy bookshop that helps fund author tours.) We went an hour early, hoping for good seats. I took a friends' daughter's book for her to get signed.

So she said she didn't tell anyone at her day job that she was writing until she was published. She didn't want to be one of those writers that talked and never wrote. I was so ashamed then to tell her, (but I did) that I had just sent a query to her literary agency for a novel I had written, citing in my query that my novel is written for older sisters and moms of Ally Carter fans. She said that will impress her agents. We'll see. I still haven't heard back from them.
author events