Showing posts from 2016
Show all

- October 31, 2016
Pitching in baseball is where the catcher and the pitcher try to outsmart the batter and either make him swing when he's not supposed to or  fake him out so he doesn't swing at a perfectly good pitch. That's not what we are talking about here. But it is similar. I am throwing a potential home run to a potential catcher...wait, I think the metaphor just fell apart. At any rate, I've got something, they might want to catch it. They call it pitching. We're talking about Industry Professionals: Agent and Editor pitches. Face to face. Just the story. Before going to the conference, I researched some pitch strategy because I really didn't know what the heck I was doing. The best one, I thought, said to build a relationship of trust first. We had five minutes to 1) introduce ourselves, 2) talk about our book 3) ask or answer questions 4) exchange information for further contact. There wasn't a lot of room for building trust. But I tried. So after my exper
Post a Comment
Read more 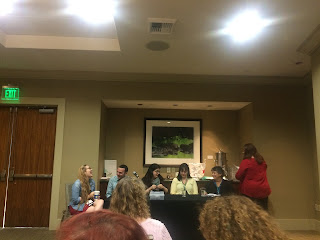 The whole story. Ever since I was a little kid I wanted to be a writer. In fourth grade, I wrote mysteries and my friend illustrated them. They made no sense. The clues were contrived and there was always a cute boy. I wrote again in Middle school, in high school, took creative writing classes in college. About eight years ago, I decided to turn my dream into a reality by taking writing seriously and started writing about two thousand words every day. I read books, watched tutorials, and studied my craft. And I wrote. I wrote a lot of crap. But finally I felt like I had something worth sharing. Something I could put out there for the masses. So, back in February Rob bought me a writer's retreat on the beach for Valentine's Day. Four days on the beach, writing, agent critique, yoga and no kids. I know, romantic right? But that's what I wanted so it was. Can we just give it a collective, awwwww? It even came with a box of chocolates. However, in June, a month away from
Post a Comment
Read more 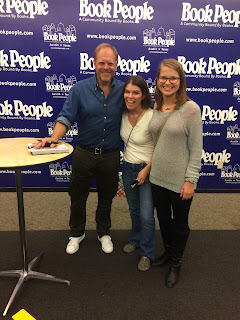 Alton Brown and I are like besties. Sunday morning I saw it come across my Facebook feed that he was coming to town. And I knew I had to go. The kids and I came to know Alton Brown after binge watching FoodNetwork Star on the internet. (No cable here!) We thought him, funny, genuine and, I don’t know, unique. Authentic. So one thing I’ve learned from going to a few of these book signings at our local Indy bookshop (see previous posts) is that the faster you buy the book, the earlier you get in line for the signing, hence out of the bookstore and the less likely I am to find something I want to spend my money on. You see, you get a letter code at the time of purchase. Since it was Sunday and the event was Tuesday, and Alton Brown was popular, I knew we were in trouble. So I had a dilemma. Was buying something on the internet breaking the Sabbath? But if I didn’t buy it on Sunday, Monday would surely put me at an F or a G! I went round and round with my husband and guess wh
Post a Comment
Read more

- October 04, 2016
Calling all Writers!  Have you ever wanted to write a novel but never had an excuse to just do it? Now you do! November is novel writing month, that means that October is making Halloween costumes for the cuties as well as plotting my novel as much as possible. What is NaNoWriMo?   It’s where you write a novel or 50,000 words with a beginning middle and an end in one month. For me I write about 2k words a day and that gives me Sundays and Thanksgiving off. If you’ve done your homework, writing two thousand words won’t take you that long. See link to sign up and get more info! Why do it? Because there may be an idea itching around the corners of your brain, wanting to come out. Here’s a time when you can actually do that. Make it happen. I write romances. But I take my NaNo as an opportunity to write in a different genre, to explore a new voice, to try out different skills, to push my boundaries. In the past, I have branched out to write a fantasy and a historical. This year I
Post a Comment
Read more 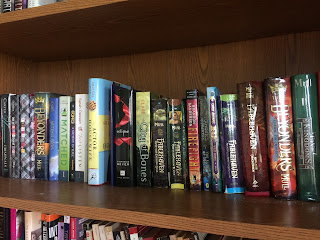 It's time to talk about my collection. Books are friends to me. Characters help me battle my inner demons and vicariously overcome as they overcome. Their creators are kindred spirits when we meet, so these are some of my most valuable possession. Each has a story. I got my first author signed books at Project Book Babe in Arizona in 2008. I had just experienced a terrible heartache and my husband thought that this charity benefit would help me shake off my depression. I came home with Stephanie Meyer's signed copy of Eclipse and by luck of the raffle, a copy of Shannon Hale's Book of a Thousand days. Plus another one.  There, I started my Signed Author Collection, and I became acquainted other authors that I have since met. Brandon Mull: I first met him when I was pregnant with my youngest over seven years ago, when we lived in St. Louis. St. Louis County library visiting author program is unsurpassed in the nation and it was a real tragedy when we had to move.  Wh
Post a Comment
Read more

- August 23, 2016
School's in again. That means I'm back to writing full-time. At least that's what I committed to on the first day of school. "Nothing is going to keep me from prioritizing my writing time," I said to my husband that morning. Foolhardy declaration. I was in the kitchen when I heard the phone buzz. It wasn't my phone but my husband was showering so I picked it up and said with a formal voice, "This is Amey Zeigler."  You never know when the next agent is going to call and I want to get in the habit, so even though it was my husband's phone, and I knew no agent was calling on his phone, especially from a local number, I still answered it with my most professional voice. "Mom!" I heard.  My near teenage daughter sounds normal in real life, but on the phone she sounds like a four-year-old and this was amplified by the pleading in her voice that sounded close to tears.  "They won't let me go to class!" "What?"
Post a Comment
Read more

- July 08, 2016
As I am always trying to learn and improve my craft of writing, I'm constantly checking out books and reading what I can do to improve my skills. If you are looking for writing books at our local library, they're all at my house, sitting in a stack on my nightstand. Please don't put a hold on any of them because then I have to lug them back. One of the books I found helpful recently, asked the question: what do you want your readers to feel when they are reading your books? I thought about it for a minute, searching around the themes and the genres of my past and present works trying to find a common thread. I found! I want them to laugh! Crap! I'm not funny. I mean, I'm not funny when I write.  I'm hilarious in person where I can add facial expressions and gestures, change the tenor of my voice to make a hilarious point. But in writing?  I guess I haven't found my voice. Or maybe I'm just not funny. And it's slightly humiliating. There
Post a Comment
Read more

- February 03, 2016
I am sitting here trying to write a crap (first) draft of a second book in a three-book series.  And I'll have to say, it's rather difficult.  I've got a plot, I've spent one whole book exploring characters, giving them life, back stories, goals, fears.  But I still struggle with this second book.  Why? Because my characters have to change.  Their relationship, their natures, their wants, desires all change as a consequence of the world we live in.  Change is hard. Change is hard to write. Change is hard to write about. We live in a changing world.  Someone once said you never see the same thing twice.  That's probably true.  More dust has settled on the bureau or night stand in the bedroom in the few seconds between glances, more sun fade on the carpet.  So the very objects around us are changing, decaying, growing. And so do our relationships. Sometimes the change is small, a gradual growth of love, imperceptible, deepening without realization.  Some
3 comments
Read more
More posts