Showing posts from December, 2011
Show all

- December 12, 2011
A few years ago, my hubby challenged me to read the first Twilight book. I took it with me on a flight and I did read the whole thing. Maybe it was because I'd already seen the movie, maybe it was my pride, but I couldn't get into it. It bored me. I decided I wasn't going to read anymore and be content consuming the content via the movies and that was that. Then, a few weeks ago, my friend lent me the rest of the series and told me to read it. I dunno, maybe I'm just one of those people that don't like to follow the crowd, or maybe I rebel against the band wagon, but I really didn't want to read it. But my friend appealed to cultural literacy. She argued that one should read the series just to know what ever one else is talking about. Agreed, I don't have a great deal of cultural literacy in pop culture, I don't watch TV or movies very often and when people were talking about "Lost" a few years ago, I felt it. There is merit to being
2 comments
Read more 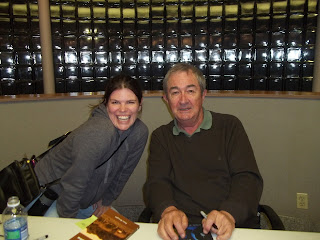 This Aussi was AWESOME! Now, I'm not usually a big fan of Middle Grade male protag fantasies. I went to his signing because my husband had a meeting that night, so I took our copy of his book to be personalized. But I left Flanagan's presentation thinking I might pick up his books. As he read from his writing, he teared up a bit, getting emotional over these characters he's created. You could tell he was passionate about writing, living and sharing. His series, Ranger's Apprentice is one of my husband's favorite and Flanagan is coming out with a new series, too! So, if you have a ten year old boy in your life, I recommend this! Oh, and PS: It's kind of a funny picture of me because he made me laugh right before the it was taken. He called me a perky American girl!
2 comments
Read more
More posts