Showing posts from 2020
Show all

- December 15, 2020
There is one distinction I have been coveting for a while in my writing career: the Crowned Heart of Excellence bestowed upon all the 5-star reviews at the Indy and Small Press Reviewing site.   I got the email telling me about the review, but I didn't pay much attention to it. Until they send the second. I was like, Summer of Sundaes got a 5-star review from a literary magazine? Wow! So then I had to Google it. After finding the review online, I was even more in awe! The review is stellar! I'm just going about my daily life saying "wow" to myself. "Wow! Someone really liked my book!" It always pleases me when people connect with the people and places I write about. They are all apart of me. The reader is enjoying a bit of my shared soul and in turn we share something together. It's really amazing. Here's part of it: "This fast-paced novella drops a resplendent meal on the reader’s mind. With the storyline unfolding very quickly, the characters
Post a Comment
Read more

A sweet romance wins third place Sweet romances can compete and win! I'm super excited for this honor.  I want to tell you, please keep going with your dreams! Success comes by hard work, persistence, consistency and focus. I'll have to say when I first started writing, one of the authors of the books I read said that if you write for ten thousand hours or one million words you'll get published. That sounds simple, but not easy. YOU CAN DO IT! KEEP GOING!  Just to add a bit of backstory about why I wrote The Swiss Mishap, I'll tell you how this book came to be. I served as a missionary for the Church of Jesus Christ of Latter-day Saints in my twenties in Switzerland and France. I had some life-changing experiences there that changed the way I viewed the world. Here are some interesting things that made it into the book: My friend and I dragged a recliner up four flights of stairs. I did talk to people on the bus and ask them questions. Usually the questions were about
Post a Comment
Read more 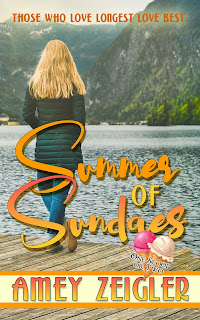 The ice cream war is on! Already this books has some a-mazing reviews!  "It was funny, sad, romantic and steamy all rolled into one. Great book!! "-- Shannon, Goodreads "This was a sweet, fun romance, and I enjoyed reading it."--K , Goodreads "A wonderfully cheerful love story with all of the right ingredients." Claudia, Goodreads   So grateful to my readers!  They make sharing this fun! Tonight I'll be sharing the story behind the story about how Brahms and Bailey came to be. Join me on YouTube Tonight at 7pm CT.   YouTube   Here's the blurb: After dropping out a semester short of college graduation, Bailey Madison inherits the management of her family's struggling ice cream shop in Seward, Alaska. When Kingsley Tours needs her prime location to expand their business into the Last Frontier, Bailey must use her wits and creative ice cream recipes to save her shop. Usually carefree and self-centered Brahms Kingsley must prove to his fathe
Post a Comment
Read more

Hello! I've decided to start a YouTube channel and talk about all the things I've learned about writing. Please check out my videos and subscribe if you feel so inclined to my channel.  Click the link or view below! https://www.youtube.com/channel/UClxrZBB--pz84cAHvC7z2Dg?view_as=subscriber I'd love any suggestions for topics you'd like to see me cover for writing, publishing or life as an author!
Post a Comment
Read more

- May 18, 2020
Writing requires talent. Writing requires skill. If you don't have much talent, you can develop your skill. There is however a third component to writing that every writer can develop and that is forming good habits. What habits do you need to become a writer?  Glad you asked. 1) Write every day. You want to be a writer? You have to write. You can talk about your plot all day long. You can map character arcs and tell me about your world building, but unless you sit your bum in the chair, you are not a writer. Don't talk about it. Write it. And try to write every day. Now, notice I didn't say write on your WIP every day. I don't do that. Some days are tough, but I try to write something, a letter, a journal entry or a note even when I can't get to the keyboard to work on a project. Why write every day? Writing something will keep you in the habit of remembering why you are here. 2) Keep a writing notebook. (Or two or three...) Ideas come in a flash. Some
Post a Comment
Read more

- May 12, 2020
As my kids get older, they are more interested in writing. At least, my two older ones. They are the ones who always have a nose in a book. So, my daughter asked me for some writing advice. I thought I'd share it here as some of you are writers in addition to readers. #1) Finish a first draft before starting new. When I first started writing, I had all these cool ideas. I'd start writing on the first one, then I'd jump to the next idea when the first idea became hard or when  newer, fresher ideas--ideas that hadn't been tainted by hard work and despair--came along, I would drop the story I started and worked on the newer idea.  When you actually sit down and finish something and it has a beginning, a middle and an end, you will feel so good about yourself. Then you know you can do it and you can replicate it. #2) Don't talk, write. If we are writers, we write. I hear a lot of people talk about their novel. I hear a lot of people saying they want to write a n
Post a Comment
Read more

- February 13, 2020
I like to write out goals every January, but by February, I've already forgotten them. Not this year. My family has a giant white board upstairs and we've written goals for our family as well as individuals. Know what I've got planned for 2020? We made goals in four areas: physical, intellectual, social and spiritual (recognizing that we are dual beings). For my writing goals, I couldn't decide where to put them and decided on intellectual since I learn so much while I write. My 2020 goal is to submit three manuscripts to publication. Why did I chose this? Well, goals need to be independent of other's choices. Notice I didn't say three pieces accepted, hahah! Because really, that's out of my control. What I can work on is getting them ready to the best of my abilities and send them off to the world. I'm turning in my first one this week. It's based on an idea from my publisher to write short "beach read" love stories having something to do
Post a Comment
Read more
More posts