Sunday morning I saw it come across my Facebook feed that he was coming to town. And I knew I had to go. The kids and I came to know Alton Brown after binge watching FoodNetwork Star on the internet. (No cable here!) We thought him, funny, genuine and, I don’t know, unique. Authentic.

So one thing I’ve learned from going to a few of these book signings at our local Indy bookshop (see previous posts) is that the faster you buy the book, the earlier you get in line for the signing, hence out of the bookstore and the less likely I am to find something I want to spend my money on. You see, you get a letter code at the time of purchase. Since it was Sunday and the event was Tuesday, and Alton Brown was popular, I knew we were in trouble.

So I had a dilemma. Was buying something on the internet breaking the Sabbath? But if I didn’t buy it on Sunday, Monday would surely put me at an F or a G! I went round and round with my husband and guess what.

I broke the Sabbath and bought the book.

I’m not bragging about that. I actually regret it now, mostly because somehow I lost my husband’s credit card in the process. But also because it didn’t matter because we got out of there early, but that story is below. So lesson learned, don’t buy things on Sunday, even on the internet. Even if it is time-sensitive. Even if I want it real bad.

Tuesday night came and we had planned on leaving here early as with evening traffic, but there was a confusion about a parent-teacher conference and well, we arrived there at 6pm, an hour before the presentation and the seating was already full. Now, they have big events and lots of people come. But because of the Fire Marshall they have to tape off areas where people can sit or stand. This is in a book store remember? Not at a library or even an auditorium. So, luckily, an hour before, we managed to squeeze by a cash desk, grabbing baskets to sit upon. And we waited. And while we waited we read.

In the next hour, hundreds of people came. I overheard the employees talking that each letter group had sixty people in it and the groups went to H. About 400 people. The floor swelled with people. And, I tell you, not all of them were inside the blue lines. (If the Fire Marshall reads this, the employees did their best!)

Then, when the furor of the crowd grew, Alton Brown finally came bounding down the stairs. We all cheered. He took the mic.

He told us our book was a collector’s item because there was some mistakes and they are going to second printing. You’re welcome. Find the corrections at altonbrown.com/oops

He answered a few questions:

He listens to jazz while he cooks. California jazz. For some reason it made me think of the music from the Incredibles.

He won’t give people advice about food allergies because he doesn’t want to get sued.

He’s releasing Good Eats II as internet episodes (cut the cord!), so be looking for that. He said he was tired of the head honchos at production telling him what he could and couldn’t do on TV. So now he’s able to cook rabbit and deer.

All photos are shot with iPhone6.

The pics were shot in his house with own stuff. Even the briefcase that is holding chips.

He said all the people at FoodNetwork were lovely humanitarians.

They talked a lot about Cutthroat Kitchen but since I’ve never seen an episode, it didn’t mean anything to me. But if you have, no one has never not bid on something. And they wouldn’t always listen to him for the Challenges, or they called them something else. (Write me in the comments if you know what it is.)

And the weirdest thing he’s ever seen is Giada’s teeth.

Then the line up began. People began snaking around Teen Lit and Travel, up the stairs.

With four-hundred people, it was taking a long time and they kept getting on the mic saying thank you for your patience. We were waiting in a bookstore for crying out loud, how bored could we be? But it was getting late. Our letter (E) was about to be called when Alton Brown’s personal assistant asked us, after seeing my daughter on the floor with a book, if it was a school night. “It’s a school night,” I said, thinking she was making conversation when she said, “Come with me.” I showed her my ticket, which letter was about to be called up and she said, “Let’s get these kids home.” And I said, “I’m with you!” Actually, I was really touched at her thoughtfulness.

She took us to the front of the line. We cut in front at least a hundred people! (There is some school teacher shaking her head at this lack of protocol.) And finally, we get to see him.

They took a bazillion pictures. These are just three of those bazillion.

He seemed pretty cheery half-way through the signing, standing there. He even took time to indulge me in a personal question. I asked him when he knew that this was his life mission. He said he always cooked and wanted to be on TV and went to culinary school as his ticket to TV.  He put his arm around me. We took pictures. And we were done.

Conversation on the way home. I asked my daughter what she thought. After all that we saw and heard her only comment was, “I’m not sure if I should be flattered or insulted that his personal assistant thought I needed to go to bed.” I stared at her, shaking my head.  “You should be grateful!” I said.

And now you want to see the book, don't you? Okay. 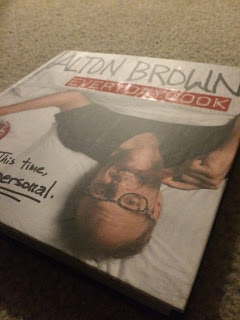