Boston in the Fall

There's that silly song that says the singer has never been to Boston in the Fall. But guess what, now I have!

I went back in May when my husband had a work trip and I joined him. I was staying in town and just walked Back Bay into the North End to see the touristy areas and to walk the Freedom Trail.

But this time, I took my mother and drove from Connecticut.

Travel tips if you plan to go:

Park and Ride if coming from out of the city. Crazy traffic. Crazy parking. If you don't want to drive all the way into the city and battle those two things, you can park at a garage at one of the terminuses of the train lines. We parked at Braintree for $9 and took the Red line in for $2.40 each way.

Be warned: there are no public bathrooms at the train stations. At least I never saw any.

Go Wednesday through Sunday to ensure you can see all the sites. Bunker Hill, USS Constitution, and the Old North Church--some of my favorite sites, were closed on Mondays and Tuesdays.

Spend all day. After about a 30-40 minute ride from Braintree, we got off on Park Street, near the Boston Commons visitor center, we arrived around 1pm. Yes, we were in time for the guided tour but decided, as time was short, to do our own pace. I wish we had come earlier, but we wanted to avoid traffic through Providence. We bought the map for $3, but the free map I picked up at Paul Revere's house (you can get on at the Boston Common visitor center) was just as good. The trail is marked the whole way (except at the end from Bunker Hill to the USS Constitution,) but more on that later. My mom is in her 70's and managed the walk just fine.

Take pictures to read later. As we were short on time, we hurried through a lot of the markers, preferring to take pictures rather than reading them so we could read them later. (We only had four hours until the museum at the end closed at five.) In some ways, I think this might be better.

Wear walking shoes. 2.5 miles is a long way when you are going slow. Plus you have to walk back.

Bring water and a snack. Although it is only 2.5 miles, you'll be doing a lot of walking. The first time I went, I ran out of water and wished I had more. Thankfully a lovely doorman gave me a bottle.

Stop at Modern Pastry or Mike's Pastry. If you like cannolis or want to try the best, you should stop at one of these on Hanover street on the Freedom Trail. Modern Pastry I think is a little better. Mike's have more variety. Go in the morning or early afternoon to avoid lines. BRING CASH! Both are a cash-only place.

If you pay, pee. Not to be vulgar here, but public restrooms are a bit scarce. This goes for pretty much anytime you are walking around a city. So if you eat somewhere or buy something somewhere, ask for a restroom. There aren't many on the trail. (I'll make a note of where the bathrooms are.)

Skip the churches except the Old North. This is just my opinion but the Old North is interesting. Each church charges some amount of money to take a small tour, usually $5.

Paul Revere's house is small. I think it's a $5.50 tour fee, but just be warned, it's small. But it's cool that is the only extant house left over from that time period in Boston so maybe worth seeing.

This tip is just a Boston tip. Don't throw away the water bottles. Recycle them or MA is one of the states that gives you .05 cents back for each bottle. You pay for it up front so you might as well collect. They have machines in grocery stores that will refund your money.

Go to the USS Constitution Museum. It looks like it's for kids, but I found it quite entertaining and educational. It's a donation-based entry fee. Military is free. Don't forget to write a thank you letter to a serviceman or woman at the end.

Eat seafood. The best thing to do here is to eat fresh seafood. It hasn't been frozen and won't taste as "fishy" as what you get from the store. Make sure you don't have allergies first.

At Bunker Hill use a map app to get you to the USS Constitution. It's a short jog down residential but shorter than going back through the trail.

Have you been to Boston? What are your favorite stops, places to visit or tips? 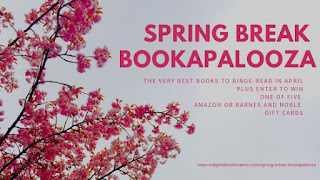 Need a book to read this spring? Are you having a book slump? Need to find a new author to enjoy? Looking for sassy heroines, alpha males, tissue romances, or a feel-good, funny read? Well, I have just the thing for you! Enter the Spring Break Bookapalooza. Be sure to click on this link to check it out. My romantic suspense book Baker's Dozen is being featured today! I talk about my dream spring break (hint: it's in France) and what I love about spring. And while you are there, check out many of the other authors featured on the site. You may find something that catches your eye. Leave a comment to interact with the authors and let them know what you think about their cover, their except or their dream spring break. Many of these authors are also published under my publisher, The Wild Rose Press. PLUS you can enter to win one of many Amazon or Barnes and Noble Gift cards with this link to the rafflecopter contest. You can earn bonus entries by following participating aut
Read more

- August 06, 2018
I asked my most ardent fans (my daughter and my husband) what I should write about on my blog and my daughter said I should write about encouraging others to keep writing. I feel like I've learned a lot in writing for the past ten years, and I'd love to share. Writing, and almost any other creative endeavor is a long process. From the spiritual creation or idea of it until its execution and finished product can take months if not years. Keeping going during that time can become a challenge. Here are my tips to stay motivated. 1. Remember why you started in the first place. I am a storyteller. I always have been. I'm horrid at asking questions but learning. But I think of funny scenarios. I'm the dreamer. Someone tells me a detail and I create a story. I don't write for the royalty check. I don't write to be famous-- although that would be nice. I write because I believe fiction can heal. I write because I believe we all need to safely escape. I write becaus
Read more