Review for Wood Fairies of Estraelia

When Elias of Elderberry introduces his best friend Jaron Finley to his magical world of fairies and castles, wizards and yōkai shape-shifters, will Jaron ever want to go back to his dull world of school and homework, especially after meeting Elieli, the fairy princess of Estraelia? It’s doubtful, but he must—the mortal that he is. Will Elias have to alter his memory and erase all that his friend has seen, or will Jaron be able to keep the secret that Elias Rey—a sophomore at PVHS, is a wizard and the youngest heir of Elderberry? 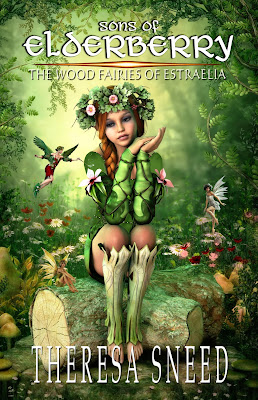 Held captive by evil wraiths in the dungeons of Sirusas, Elias’s older brother Saulen struggles with remembering who he is. How will the sons of Elderberry battle the dark forces of sorcery and rescue him?And finally, when Adalee trips and falls by a nest abandoned from a Swypht Dragon of Ural, she takes an egg, knowing it has little chance to survive on its own. How will she keep it hidden in the non-dragon fairy kingdom of Estraelia? And why should she?

Elias of Elderberry is a truly marvelous book! The action, concept, and mysteries contained in this novel are intensely compelling and exciting. Not satisfied with simply writing an entertaining story, Sneed fills the pages with lessons about temptation, addiction, and the morals of right versus wrong. - R.L. Drembic


The Sons of Elderberry! Book One, Elias of Elderberry, was fantastic! I am eager to read the continuing sequels. Do any of us really know who we are and what our real worth is? Fifteen-year-old Elias was soon to discover things beyond his wildest imagination. This is about present day with regular school attendance, yet also, time travel with castles, dungeons, dragons and more! There were many characters well-defined and realistic. Also, the scenes were portrayed very well so the reader was able to easily picture them occurring. My Review of this book offers a Five Stars rating. - LAWonder10


Her
books are unique; each story will take you to places you have never imagined before.
She writes across four genres—mystery and suspense, fantasy, historical
fiction/time travel, and realistic paranormal. All of Theresa’s books have
elements of sweet romance, and while none of her books have profanity or
sexually explicit scenes, each book is intriguing and white-knuckle intense—the
kind you can’t put down. 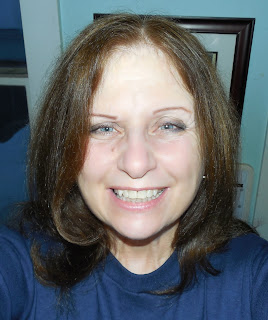 The No Angel series is the story about a
guardian angel with an attitude, and the ever present, but misunderstood spirit
world.  There are four published books in
the series with many more to come. Book one is called Angel with an Attitude, book two – Earthbound Angel, book three – Destiny’s
Angel
, and book four – Earth Angel.


The
Sons of Elderberry series has two
books out called Elias of Elderberry, and The Wood Fairies of Estraelia.
Harry-Potterish—with wizards, fairies, elves, pixies, yōkai shapeshifters, and
dragons, this book has it all! Theresa anticipates another three to five books
to finish that series.


Escape is
the story of a 15 year old girl abducted by a corrupt sheriff in the 70’s. He
keeps her captive in his cellar for five years until she escapes with his truck
and his young daughter. Escape is
book one in a three book series.


Salem Witch Haunt
was intended to be a stand-alone book, until the shocking ending made it
apparent that her characters were not finished telling their story. As the
ninth great granddaughter of one of the women hanged as a witch in Salem,
Theresa has a vested interest in this epic time-travel. Thoroughly researched,
all interactions with real people from that era are based on primary
sources—the trial scene with Susannah Martin is taken from Reverend Samuel
Parris’s transcript verbatim.


All
of Theresa Sneed’s books may be purchased through Amazon or links on her
website at www.theresasneed.com.
She loves hearing from her readers and may be contacted through her website or
through her email at tmsneed.author@yahoo.com.


Connect with the Author here:

Books You Need to Sharpen Your Skills as a Writer

When I first started writing, I wrote short stories and scenes. When I decided to try my hand at writing a novel, I soon discovered that this was a different beast. And I mean beast! Now that I've tamed the beast (for a novel is a huge unruly thing), I can finally hone my skills, fine tune my writing, make my storytelling stand out and develop my style and voice. I've had some help along the way.  My top ten favorite books now are listed below and why I like them. 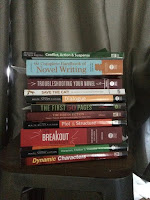 My collection of books. In the order I bought them.

1. The Complete Handbook of Novel Writing. Writer's Digest 2nd edition. I used this book as a base for when I first started writing. It's a compilation of different writers on different subjects. It's a good first book for starting out to get an overview of how to write a novel.
2. Fire in the Fiction: passion, purpose and techniques by Donald Maass. Writer's Digest Books. He talks about writing deep, passionately, purposefully. Make your book matter.
3. The Breakout Novelist: craft and strategies for career fiction writers by Donald Maass. Writer's Digest Books. This one talks about writing a book that will break out of the midlist, harnessing the unique story within you.
4. Plot and Structure: techniques and exercises for crafting a plot that grips readers from start to finish by James Bell. Writer's Digest Books. Once I felt like I had a story to tell, I bought a book on plot and structure because I didn't know how to weld the unmanageable beast that is the novel. I still consult this book after I finish a first draft. (And what is going on with these super long subtitles?)
5. Conflict, Action and Suspense by William Noble. Writer's Digest Books. But you write romances, you say. Why do you need this book? Well, if you think there is no conflict or action or suspense in romance books, you must not be reading them. Romances are fraught with conflict. And suspense? It's called tension. And every book must have it! Anticipation is the word of the day.
6. Dialogue: Techniques and exercises for crafting effective dialogue by Gloria Kempton. Writer's Digest Books. I bought these next three books together after I received some feedback that my dialogue and characters were flat. Though it was much needed feedback, it really hit me hard because with a theatrical background, I thought I was "good" at dialogue. This book helped me learn that dialogue has a deep purpose.
7. Characters, Emotion and Viewpoint:Techniques and exercises for crafting dynamic characters and effective viewpoints by Nancy Kress. Writer's Digest Books. This one helped me create a sense of emotion through characters and viewpoint, really helping me hone my character's reactions, motivations, and reveal these in a beautiful way.
8. Dynamic Characters: How to create personalities that keep readers captivated by Nancy Kress. Writer's Digest Books. I want to have characters that change us, help us to see a truth, embody a virtue. Excellent book for this.
9. Save the Cat by Blake Snyder. Michael Wiese Productions. This book is actually on screenwriting, but it's a book about storytelling. How the story beats play out. I like to take my story and lay it over the top of his story beats. He also gives an interesting twist to classifying your story. Worth a look.
10. The First 50 Pages:Engage agents, editors and readers, and set up your novel for success by Jeff Gerke. I wanted to make sure that I was sending out the very best of my work in the first fifty pages, which is what most people are going to read to get an idea of your story.

Honorable mentions: Writing the Heart of Your Story:The secret of crafting an unforgettable story by C.S. Larkin. I don't own this one, but it helped me to reach down deep inside me and to talk about things that have been buried for a long time, things that are important issues to me, things that are sensitive and dear to me. Troubleshooting Your Novel: Essential techniques for identifying and solving manuscript problems by Stephan James. See? I still have problems with my novels. I haven't finished reading this one yet since I just got it for Christmas, but so far it's been very thought provoking.

What are your favorite writing books? Tools? Websites?
at January 10, 2017 No comments:

Hello! I've decided to start a YouTube channel and talk about all the things I've learned about writing. Please check out my videos ... 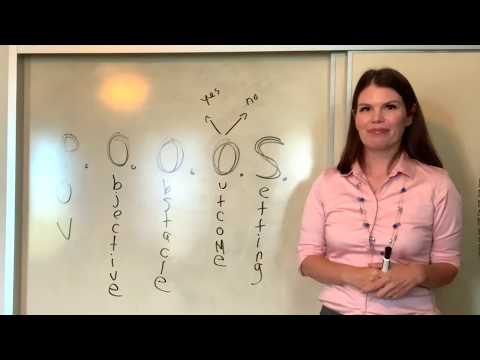